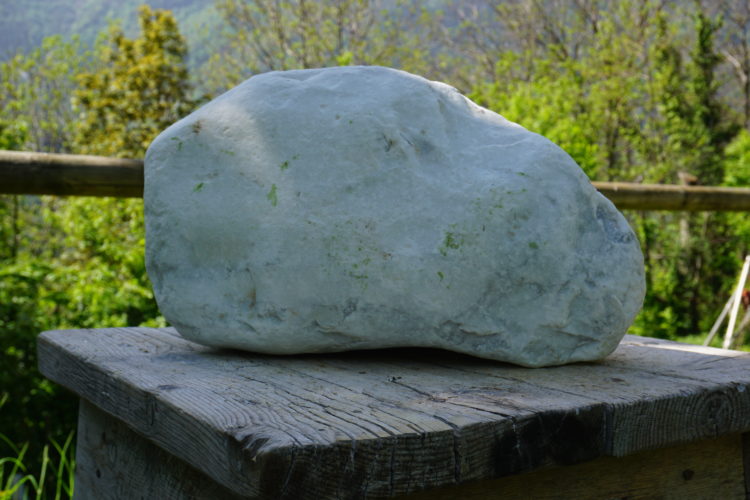 Our first activity Monday morning was to head to the river to select our stones. To me, this sounded both completely idyllic and highly improbable. If there were good pieces of marble in the river, then: 1) why were they still there and 2) how did there always manage to be enough “good” stones available for the students to choose from. Well, it turned out to be both completely true and awesome.

I had never seen a river of marble before, but there it was – white, sparkling stones of all shapes and sizes covering the river bed, probably 30 feet across. It was incredibly beautiful. And it turns out that the stones do not magically appear there, but rather are the result of the active quarries in the valley. Think of something similar to mountain-top coal mining in West Virginia where the tailings, under-sized rocks and off-spec boulders are pushed off the side of the mountain to fall to the valley floor below. Except here all of that waste is marble rather than dirt (and we heard it crash down the mountain every hour or two each day).  And so, the stones begin their journey down the river being smoothed and polished along the way. The instructor estimated (based on the markings and evidence of historical mining techniques) that the stones we were selecting from were removed from the quarries 200-250 years ago.

We were advised to come to camp with a few ideas about what we wanted to carve. Great, except that it is very difficult to judge what is or is not possible in two weeks if you’ve never hit a stone with a chisel before. The instructor provided some last minute guidance on what to sculpt for anyone who did not yet have an idea:

The other major point of discussion (and a major theme of the course), was a

stylistic debate about whether you should attempt to force your idea into the stone, allow the stone to reveal what is already inside of it or seek to “negotiate” with the stone towards

some type of compromise. While I struggled to imagine negotiating with a stone, I accepted this as a reasonable place to start.

I had done my homework, had my idea and set out to find a stone which could accommodate my design. After my first three stones were rejected by the instructor for impurities and high probability of cracking and after I rejected

one the instructor suggested, I finally had my stone. By my estimate it weighed 45-50 pounds (and this is actually one of my superpowers, especially estimating the weight of luggage). And so we all piled back into the van and headed up the windy, incredibly steep road to Campo.