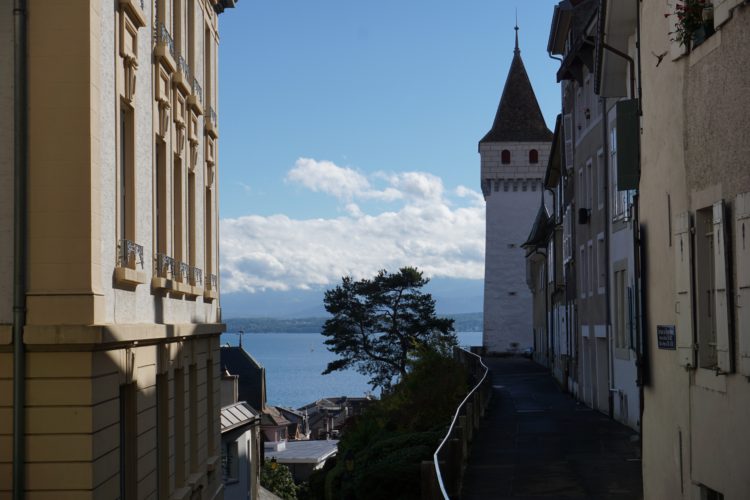 We have very cool cousins (Doug, Diana and their daughter Ruhamah) that live in Geneva that I haven’t seen in years, so we have been looking forward to visiting them. If you look at the map, Geneva looks pretty darn close to Torino (150 miles). However, there is a bit of geography that adds to the route, specifically, the Alps. In order to get to Switzerland from Italy, you have to go through them. Josh drove through Italy in pouring rain (no small feat, given the incredibly aggressive drivers on the autostrada). By the time we got to the mountain pass, it was snowing. Very beautiful, but a bit unsettling on the treacherous roads. Then we arrived at the Mont Blanc tunnel, which is over seven miles long. It also costs €44 ($48). That is one expensive, long tunnel.

After a brief pass through France, we arrived in Switzerland. The differences from Italy were immediately noticeable. It was as if all the cars swung into a synchronized swimming routine, driving neatly and serenely. Before getting to our cousins house in Nyon, we parked the car along the shore of Lake Geneva. It was immaculate, stunning and so quiet. As we crossed the street to a nearby park, I grabbed Noah’s shoulder as a car approached the crosswalk. Pedestrians in Italy are not king. They are not even princesses. You must cross streets at your own peril. Amazingly, the car stopped at the crosswalk, letting us meander across the street. At the park, a man swept leaves on a lawn so manicured that we were all staring. Ok, you get it, Switzerland is really clean and pretty. I felt like I was in the Orange County of Europe (S. Cal people will get this reference). It was perfect yet slightly devoid of personality.

Nyon, a hamlet 16 miles north of Geneva where our cousins live, is about as idyllic a spot as one could imagine. Diana took us to the Saturday market, which had incredible mushrooms and seasonal fruit. We meandered around the downtown which was cobblestoned and framed by boutiques with brightly colored shutters. They even have Roman ruins, which Doug informed us were actually moved so that they could be displayed in a more attractive place.

Everything was really, really expensive. This is something one hears about Switzerland, but then you see that a hamburger cost €25. Actually, 25 Swiss Francs. The Swiss don’t share the common currency with its neighbors because it is not a member of the European Union. Living a sabbatical year in Switzerland would have required a different budget calculation for sure.

We went into Geneva for the day, and met up with a very good friend of mine from business school, Deborah. She has been in Geneva for nine years and was a lovely guide–especially when it came to chocolate. She took us to her two favorite chocolate shops (verified after many years of intensive research). It is not an exaggeration to say it was the best chocolate we’ve ever had. Please go straight to Aurer and Läderach when you arrive in Geneva.

Doug and Diana took us on a beautiful hike to round out our Swiss weekend. We drove 30 minutes into the Jura mountains, a sub-Alpine mountain range. The beauty of hiking in Europe is you can do a 50 minute hike (as we did to Couvaloup de Crans) and arrive at a restaurant. We ate croute au fromage – a Swiss version of cheese on toast- and blueberry pie. Not a bad payoff for less than an hour’s walk.

I need to make mention here that our cousins have a sweet Scottish sheep dog named Fred. I was given a lot of grief over the weekend for proclaiming that I am “not really a dog person”. But, the kids would be angry if I didn’t mention Fred, who was one of their trip highlights. I am still not a dog person, but Fred was a very cool dog.

We were sad to leave Switzerland, as we would have loved to take a boat on the lake, or visit more of the small towns. This won’t be our last trip there. As we drove back through a different tunnel into Italy, we braced ourselves for the change of speed and level of danger of Italian highway driving. After being nearly sideswiped by a Maserati going 110 mph, I thought, yup, it’s good to be home. Next time, we are taking the train.