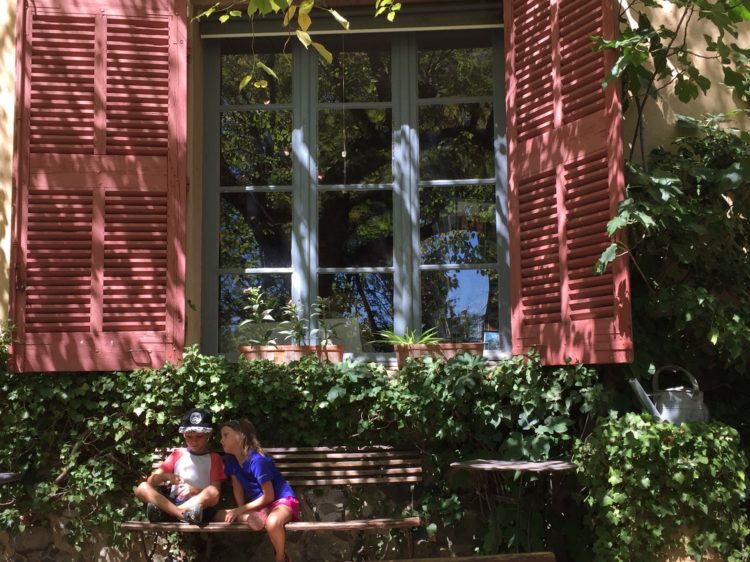 Our week in south of France was intended to be equal parts rest and adventure. We were coming off of a full eight days basking in the Majorcan Spanish sun. We wanted to have time to explore, but also to just enjoy tour beautiful rental house. Aix-en-Provence was an ideal jumping off point to so many places of interest in the south of France. On a somber note, we were very mindful that France is a country in a state of emergency. In fact, every city we went to had armed police or army patrolling visibly, a palpable reminder of the serious issues that France is facing. 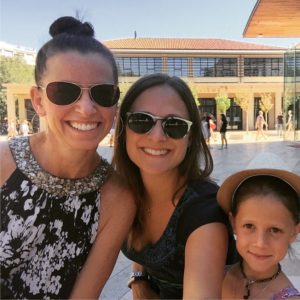 An exciting twist, our friend Jessica Nassie, who I have known for almost 20 years (since I was 5! hee hee hee), was joining us. It was fun to be a fivesome, and the week flew by. We enjoyed the pool very much, but there was more to France than swimming. 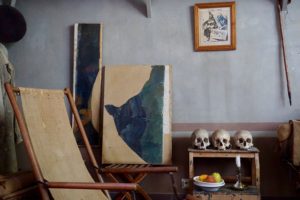 Atelier Cezanne– Up a steep hill behind the old town of Aix, the studio that the artist designed himself and where he created many famous paintings, is open to the public. Interestingly, it was scheduled for demolition in the 1950s, but an American preservationist saved it from the wrecking ball. The kids were enthralled by the every day objects made famous by the artist in his still life paintings that were on display. Even something as simple as a coat and bowler hat is interesting when it belongs to Cezanne.

2. Côté Jardin– Nestled in the little village of Bouc Bel Air where we stayed, we found this lovely dinner spot with an outdoor garden. It was a lot of fun to watch Nassie’s eyes as an entire fish, including head and tail, was placed in front of her. The local Rosé we shared was summer in a bottle.

3. Cassis– The sister city to Portofino, Italy (a favorite place of ours), this beautiful little city on the southern coast of France was a treasure. The search for parking rivaled Los Angeles, but once we sorted that out, we were free to sit on a pebbled beach and stare out at the Mediterranean, framed by limestone cliffs. The pastel-colored, postcard-ready town is a bit touristy, but the atmosphere is so convivial and the mussels were so delicious, that we had a magical day anyway. 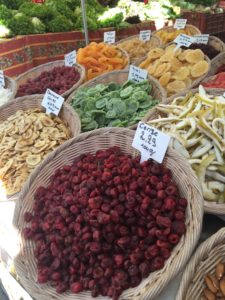 Outdoor markets– From the Sunday market we stumbled upon in Bouc Bel Air, to the famous markets of Aix, we savored the abundance in variety of fresh, local, pretty, interesting, strange, fragrant, schlocky items to discovered.

5. Alpine road trip- Our exit from France was a four hour drive along the A51 and D1075. These roads took us up through French hamlets and made us feel like we were in the Tour de France. A thunder storm that threatened us only actually briefly rained on us. It mostly gave us a dramatic backdrop of fast-moving clouds that cast shadows on the luminous valleys below. We could see why this is the heart of wine and fruit country in France. The verdant fields of sunflowers and grapes rolled by endlessly.

We have to make mention of the jumping trampoline in Aix as an honorable mention. Noah, who is not a thrill seeker by nature, was uncharacteristically brave as he went first to try it out. He had so much fun that we had to go back the next day. Sylvia was her high-flying self, earning style points for her acrobatics.

Josh insists on a shout out to Pont du Gard. He will tell you that it is an aqueduct built in 50 AD to deliver water supply to Marseilles. It is multi-arched, multi-tiered, incredible piece of Roman engineering. I would say that the environment was like the Sacramento River or Lake Havasu, as hoards of people moved to swim/kayak/inhabit the waters below.