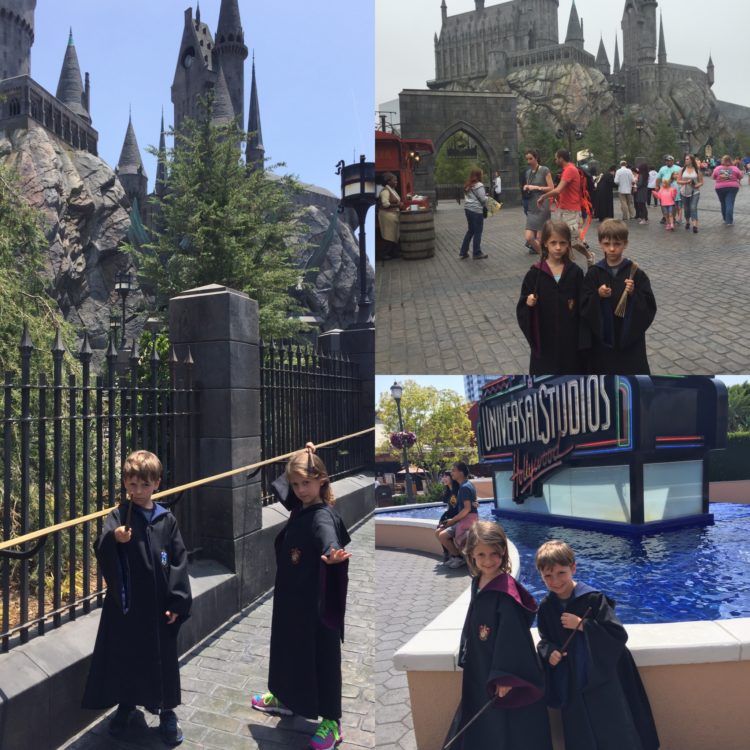 I took the kids to Universal Studios today. It is a day that we have had on the calendar for over two months. it was planned for the Wednesday after my last day of work. First day of June. It became a topic of conversation, a negotiation, a something-to-look-forward to. Anticipation with kids is a really funny thing. Sometimes their big imaginations can conjure something so much better than the real thing, that you never know if the realization of the real thing is going to be a huge let down.

We started the day off right. Got to the gates at 8:10, just minutes after early admission (which we had because we bought our tickets online). We had talked about what we were going to do—head straight to Wizarding World of Harry Potter. More specifically, we were making a beeline to Ollivanders wand shop, seeing the “show”, buying two wands (both the $50 interactive kind, pre-negotatiated) AND two wizarding robes in the respective appropriate houses Gryffindor (Sylvie) and Ravenclaw (Noah).

As we oohed and aaahed our way into Hogsmeade, we took a few perfunctory entrance pictures—but scooted our way quickly to Ollivanders. The premise, for those of you who live under a rock far away from all things Harry Potter, is an old dude in a wand store picks a kid and then “the wand picks the wizard”. Amazingly, the old wand dude picked my kids. Yes, both of them, to star in the show. So, my day was already topped out at 8:23. They both gamely tried the spells with incorrect wands before the moment of truth—and the magic of Universal had them both performing a spell in front of a pleased audience. SO, then onto the shop itself and the selection of wands and robes. And the beauty of it, the kids were so happy and excited. The day was living up to its promise.

We did a bunch of other things, including the studio tour, which, by the way, they have added two nausea-inducing 3D vignettes (King Kong and Fast and Furious) that are unreal. I thought the JAWS and flood were as cool as it could get when I was a kid!

But, as we left the park triumphantly before the afternoon traffic build up on the 405 freeway, I marveled at our Day That Met or Exceeded Expectations. I guess there really is magic at the Wizarding World.